Smart thermostats are thermostats that can be used with home automation and are responsible for controlling a home’s heating and/or air conditioning. They perform similar functions as a Programmable thermostat as they allow the user to control the temperature of their home throughout the day using a schedule, but also contain additional features, such as sensors and WiFi connectivity, that improve upon the issues with programmable thermostats.

Like a connected thermostat, they are connected to the Internet. They allow users to adjust heating settings from other internet-connected devices, such as a laptop or smartphones. This allows users to control the thermostat remotely. This ease of use is essential for ensuring energy savings: studies have shown that households with programmable thermostats actually have higher energy consumption than those with simple thermostats because residents program them incorrectly or disable them completely.

Smart thermostats also record internal/external temperatures, time the HVAC system has been running and can even notify you if your air filter needs to be replaced. This information is typically displayed later on an internet-connected device. 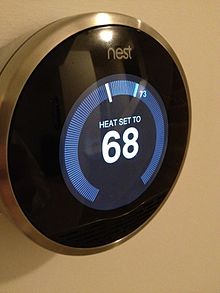 Manual vs. programmable vs. smart thermostats 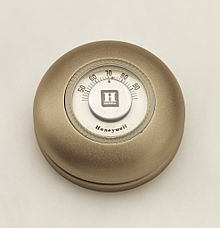 As a result of these studies and others like them , energy star suspended its labelling of programmable thermostats in December 2009. It became the goal of smart thermostats to address these issues by taking the human out of the picture and creating a thermostat that uses smart computing to truly reduce energy usage and cost.

Following the ecobee, EnergyHub released its version of a smart thermostat in 2009 with the creation of the EnergyHub Dashboard. The co-founder of EnergyHub, Seth Frader-Thompson, got the idea for the Dashboard from his Prius. The Prius had screens on the dashboard that displayed the car’s gas mileage in real time. Thompson felt that a house should have something that does the same. With that goal in mind, Thompson created a thermostat that could communicate with a home’s furnace and appliances to determine the energy usage and efficiency and how much it was costing. The thermostat also had the capability to turn off appliances or raise and lower the temperature to save energy and cost. Ultimately, the goal of this thermostat was to display energy usage to users and to save energy and money.

In 2011, Nest Labs developed the Nest Lerning Thermostat.The Nest Thermostat attempted to reduce home energy consumption by addressing the problems with programmable thermostats through the use of better technology. This new technology included the implementation of sensors, algorithms, machine learning, and cloud computing. These technologies learn the behaviors and preferences of the occupants, and adjust the temperature up or down to make the occupant comfortable when they are home and to save energy when they are away. Additionally, the Nest Thermostat connects to the home Wi-Fi. This allows users to change the temperature, adjust the schedule, and check energy usage from a smartphone or laptop. All of these features were part of Nest’s goal to create an easy to use thermostat that saves users energy and money.

The programmable schedule feature on the smart thermostat is similar to that on standard programmable thermostats. Users are given the option to program a custom schedule to reduce energy usage when they are away from the home. Studies have shown, though, that manually creating a schedule may lead to more energy usage than just keeping the thermostat at a set temperature. To avoid this problem, smart thermostats also provide an auto schedule feature. This feature requires the use of algorithms and pattern recognition to create a schedule that results in occupant comfort and energy savings. Upon creating a schedule, the thermostat will continue monitoring occupant behavior to make changes to the auto schedule. By taking the human error out of the scheduling, smart thermostats can create smart schedules that actually save energy. 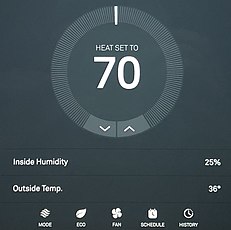 create a schedule, and view past energy usage

In an attempt to mitigate the issues with human error involved with programmable thermostats, the smart thermostat utilizes a sensor that can determine occupancy patterns to automatically change the temperature based on occupant patterns and behaviors. The Nest Learning Thermostat in particular uses passive infrared (PIR) motion sensors inside the unit to sense occupancy in the vicinity of the thermostat. This sensor informs the thermostat whether or not the home is occupied. In the case that the home is not occupied, the thermostat can suspend heating/cooling until the sensor is reactivated by an occupant. This sensor is also used to determine the occupancy patterns to create the auto schedule. A grille member is placed in front of the sensor to visually conceal and protect the PIR motion sensor inside the thermostat. The grille also helps to make the thermostat visually pleasing. While this sensor technology is important for conserving energy, it is not without flaws. One of the major issues is that the sensor must be activated by someone walking in front of or near the thermostat. It is possible that an occupant could be at home and not pass in front of the sensor. In this case, the thermostat would shut off the heating/cooling and decrease human comfort.

Another major feature of smart thermostats is their ability to connect to the internet. Smart thermostats are designed with a WiFi module that allows the thermostat to connect to the users home or office network and interface with a web portal or smartphone application, allowing users to control the unit remotely. The WiFi feature also has the ability to send reports on energy usage and HVAC system performance via the web portal, informing the user on their energy efficiency and how it compares to other smart thermostat users. It also alerts users when a problem arises with their HVAC system or when it is time for equipment maintenance. The thermostat also uses the WiFi connection to display current weather conditions and the weather forecast.

Another feature offered by some smart thermostats through the internet connection is geofencing. A geofence  is a perimeter boundary created around the location of a smartphone or other device, based on GPS signals. The benefit of having a smart thermostat with geofencing capabilities is that it uses a users smartphone location to determine whether the home is occupied. Instead of using a schedule or sensor to determine occupancy, the smart thermostat can rely on the location of the geofence to tell the HVAC system whether it needs to be on or off. Since most people carry their phones with them, geofencing can be an accurate way to determine occupancy patterns. 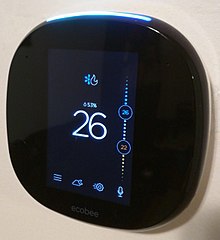 A wireless Network can be used to sense when someone is out of range, thus determining if they’re in or nearby their home. This technique called  geofencing is used by the Honeywell T6 Smart Thermostat.

A Connected thermostat is one that can be controlled through an internet connection, but will not provide analytic information. In recent years WI-FI thermostats have risen in popularity, they combine the technology of thermometers and WI-FI. So now you can have a thermometer in your home that is displayed on your phone that uses WiFi technology. This technology is being developed right now so it will be available for thermostats in machinery and cars. Google are involved in this push towards technology since they acquired a Wi-Fi temperature company called Nest. The market of smart thermostats is expected to reach around 3.5 Billion USD by the end of the year 2022.

Rather than controlling the temperature of the whole house, zoned systems can control individual rooms. This can increase energy savings, for example by heating or cooling only a Home-office and not the bedrooms and other areas that are empty during the day.

The most advanced smart thermostats combine both: they are able to learn when each room of a house is normally occupied and automatically schedule the heating for that room appropriately. Currently, the only such system available for home use is Heat Genius.

To determine energy savings using actual data instead of energy models, in February 2015, Nest conducted a national study of Nest customers in 41 states who had enrolled in Nest’s MyHVAC-Energy service. In May 2013, Nest acquired MyEnergy, a company that tracks and analyzes utility usage of people enrolled in the program. Upon acquiring My energy-Energy, Nest was able to use the historical data to determine the energy savings of those who installed the Nest Learning Thermostat. This study looked at energy usage before and after the installation of a Nest Learning Thermostat and used a weather normalization procedure to prevent unusually cold or warm weather from skewing the data. The study had a sample size of 735 homes for gas usage analysis and 624 homes for electrical analysis. All of these homes were enrolled in the MyEnergy program and had sufficient energy data before and after the installation of a Nest Learning Thermostat. After observing the energy usage for one year, Nest determined that there was an average gas savings of 10% and a cooling savings of 17.5%. The savings varied from house to house depending on how occupants set their thermostat before the installation of a Nest thermostat, along with differences in occupancy patterns, house characteristics, and weather.

While the results from the MyEnergy study are significantly lower than those from energy modeling, both show a savings in energy usage by switching to a smart thermostat.