What is a Surge Protector?

The surge protector definition is an electrical device that protects the computer system as well as various electronic devices from sudden voltages within electrical power otherwise transient voltage that supply from the power supply. In Canada, the limit of standard voltage used for home, office, or buildings is 120 volts.

If the voltage is increased over this amount then it is considered as transient voltage. This voltage can harm all the electronic devices which are plugged into a channel. Although surges are so short, they are calculated in nanoseconds. These can cause huge harm to electronic devices. 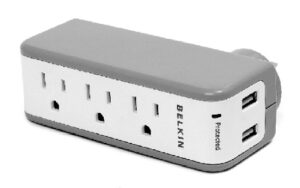 How Does Surge Protector Work?

A surge protector working principle is by directing the additional voltage into the grounding wire of outlets, avoiding it against supplying through the devices while at the equal time permitting the usual voltage for maintaining along its lane. The surges can harm the computer system through blazing its wires otherwise slowly over time wearing down the interior components of the equipment and also destroy any saved data. These protectors are also used for protecting cable as well as telephone lines because these also hold electric current.

These protectors are normally shielded apparatus from lower voltage surges. These types of surges occur often in current electrical wiring. For instance, electronic devices like air conditioners & refrigerators require using more energy to control motors, as well as compressors, forming surges within the power, which can disturb the stable flow of voltage.

Power surges can cause by defective wiring, faulty devices, and down power lines at the power source that can cause power surges too. Alternate names of surge protectors are surge suppressors, power strips & transient suppressors.

Surge protectors are classified into four types which include the following.

This kind of surge protector installation is at the entrance of the Meter base.

This kind of surge protectors is arranged on the load side to the entrance of the main service to guard the entrance of electrical service from motor-driven searches, lightning energy & other inside produced surges. The main intention of this protector is to defend responsive electronics as well as different loads based on microprocessors through transient voltage limiting. These surge panels are used in different applications like commercial, residual and industrial.

These are secondary surge protectors. A power strip is used to plug into any electrical channel. These strips are available with numerous channels so that several electrical devices can connect. If there is an electrical surge occurs then the power strip will cut the power. This is the most useful feature to protect the devices from damage.

This kind of protector provides a different type of summit to view the protection of surge than the power strips provide. These protectors offer defence for industrial applications like PLCs automation of factory, motors drives which are obtainable in both configurations like DIN mounted and standard wall. These protectors also give wired within the protection of surge for devices used in commercial and industrial equipment cabinets. There are several types of surge protectors available in the market that can guard a few devices in a home as well as commercial services in the whole electrical system. 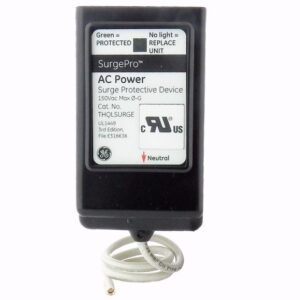 The advantages of surge protectors include the following.

The disadvantages of surge protectors include the following.

Surge protectors are used to guarding electronic equipment against surges. The equipment which is at risk includes the following.

Thus, this is all about the Surge protector. From the above information finally, we can conclude that by using these protectors, electronic appliances used in homes like refrigerators, laundry units, dishwashers will also be sheltered from harm. It provides expediency by opening up additional obtainable outlets to you; however, they can also conserve your money when you control the multiple devices by a flick of the knob only. Here is a question for you, what is the function of a surge protector?

Is a circuit breaker a surge protector?

While circuit breakers protect wires from starting a fire due to too many amps (amount of electrical current), surge protectors protect your appliances from power surges, which is a brief spike in voltage (electrical power or force.